Have you ever had this happen?

…You see “her” and you’re dying to meet her.  You know you’ll probably never see her again. So you MUST make a move….but what do you say? 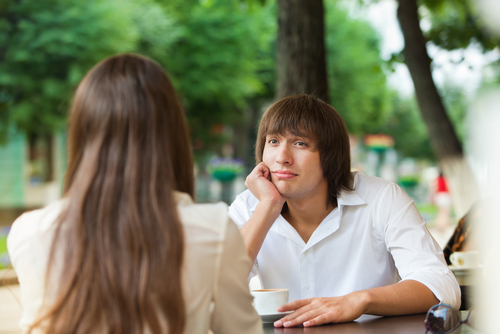 You figure a woman like “her” gets approached what…10, 20, 30 times a week? You also figure just about  every man who knows her has tried to date her, at least  once.

She might even have a boyfriend, or a husband! And even if you knew exactly what to say, how would you keep her attention and find a reason to get her number and talk to her again?[Read: Is She Out Of Your League?]

Relax. Every other man on earth has the same questions when he sees “her.” So let’s look at a few easy ways that you can start a conversation without giving yourself a heart attack…

Most of us men are puzzled about how to start a conversation with a woman because we have an elevated expectation. This is not fair to you or to her. She’s human, and it’s okay to initiate a conversation with her in the same way you would with any other human being:

Ok. this might sound so simple but hey! Every conversation has a starting point. And just saying hi! could change a greeting into a conversation.[Read: How To Have Confidence On Women]

Of course, you want to engage her in interesting conversation that sets you apart from the other men who approach her. But first you have to get your foot in the door and you don’t need an over-the-top opener to do that.

This will make it easy to move to the next step…

Second, Work on Your Improv

The best way to connect with a woman is to be as present  with her as possible. Women are much more intuitive than men can tell when you are “in your own head” or focused on something other than the moment. The problem is that being  spontaneous in our conversation is not a skill which comes naturally to most men.

This is why it’s important to practice your skills of  improvisation at all times, whether you are approaching a woman or not. By improvisation I mean being able to pick out something from your surrounding environment and build a conversation around it. Women are people and they want to be talked to that way.

Having a premeditated plan about what you are going to say to a woman will only make you sound phony. So start practicing your improvisation skills everywhere that you go using these simple techniques:

1. Talk to everyone you can

The next time you go somewhere, get into the habit of saying:  “Good morning” to as many people as possible. Once you’re  comfortable with this, add the phrase: “How are you?” This simple exercise will sharpen your social skills and get you used to talking to people you don’t know.

If you don’t talk to anyone and just wait till you see “her”, your social skills will be sluggish and awkward. You’ll also be nervous because you’ll have more invested in the interaction. So don’t wait until you see “her” to start working on your conversation skills, put in the work now so you’ll be ready when the time comes.[Read: How To Improve Appearance Overnight]

Remember, it wasn’t raining when Noah built the Ark.

Even if you don’t use these props, make it a habit to come up with something that you could possibly say to someone about it. This might seem difficult and awkward at first, but that’s only because it’s not part of your routine right now. Do it anyway, keeping in mind that everything that you can now do well was once difficult and
awkward.

For example, if you’re in a Starbucks getting a cup of coffee  you can ask her: “Have you had the ___, I was thinking about getting it.” Again, very simple but you never know where the conversation might lead. Most women are pretty good at talking, especially if there might be some kind of interest on her part.

In other words, it’s not always up to you to do all the work and that’s a good thing. This is where the final step of starting a conversation comes in.

Either way, there’s no reason for you to get nervous about starting a conversation because of these two possibilities. No man, dead or alive, has ever been able to gain the interest of every woman he speaks to… so there is no reason to put yourself under that kind of pressure. On the other hand, if she is interested you can take a lot of the pressure off yourself with a little verbal tennis.

In other words, practice hitting the “ball” back to her every time you say something by adding a question. Again, this will take some practice so it’s a good idea to find someone to practice with so that your skills are sharp when you meet her.

Here is a little competitive game that will help you to master the art of verbal tennis: First, you will need a friend of yours (male or  female) to start a conversation with you by asking you a question.

You will also need a small item (like a tennis ball) that you can toss back and forth. After your friend asks the first question, have them toss the ball to you. Your job is to then respond to the question, ask them a question and throw the ball back to them.

Keep this up as long as possible, and whoever is holding the ball and not able to come up with a new question loses the game. As silly as this may sound to you, it will help you to build the conversation skills that will enable you to engage in a two-way conversation. [Read: What Really  Turns Her On]

If the woman you are speaking to has any kind of interest in you at all, she will do her part to help you keep things going.

Now, you might be thinking: “Okay, this is great for starting the conversation, but what then?”

Well, stay tuned because we’ll be getting into that within the next  few posts…