Have you ever had the “magic” just die in an interaction with a woman? You know, one moment it seems like she’s interested, then suddenly you are left wondering what happened. You try so hard to get her interest back, but it’s almost as if you crossed over some magic line and you can’t cross back. Then she’s either not returning your calls or you get the: 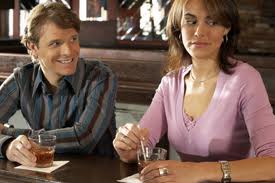 And better yet…how can you stop it from happening? Well, before we get into practical strategies for keeping a woman’s attention, let’s make sure you’re not making one of these five fatal errors. [Read: Is She Out League?]

The first possibility is that he is talking about himself more than he is listening to her, which is a major turnoff for anyone. Their need to be heard and acknowledged is one of the primary emotional needs for every human being. Just think of how frustrating it is when you are with someone and they are only talking about themselves. If you really want to “impress” a woman, focus on being interested in her instead of interesting to her.

The second possibility is that he is trying to impress her with things like his possessions, his income or his accomplishments.

To a man, these things might be impressive. But women are more interested in relationships and connections.

2. Agreeing with Everything She Says

Do you think that a woman is looking for a man who agrees with her on everything and likes all the same things that she does? Do you avoid disagreeing with a woman because of this or trying to find out how she feels about something before you speak up?[Read: Psychology Of Attracting Women]

If so, I can bet you’ve had a lot of relationships end after just a few dates. In addition to a person’s need to be heard and understood, people need to have a bit of variety and excitement in their lives.

If a woman finds that you are agreeing with her on everything, she’s probably going to get bored very fast. Not only that, after a while she is going to realize that you are counting on her to lead the interaction, which is not what a woman wants from a man.

This does not mean that you have to argue or debate with her, that’s very unattractive for most women.

But if you disagree with something a woman says or if you have an interest that’s different from hers, don’t be afraid to tell her. This will show her that you are an independent man who is capable of making his own decisions, which is what most women want in a man.

Are you the kind of guy who picks up the phone every time that a woman calls no matter how busy you are? Do you sometimes agree to go out with her even when you have other things to do?

If so, you’re making the fatal mistake of being too available to her. Now don’t get me wrong on this, I’m not saying that you play juvenile games like “hard to get”.

But it’s important that you have your own life to live and that you don’t completely rearrange it around a woman. Think about it this way, are you willing to rearrange your entire life around her for the rest of your life?

If not, you are only setting her up for disappointment on the day when you finally decide to start living your own life again. Not only that, being too available to a woman lowers your social value because it shows that you don’t have anything else in your life but her.[Use Of Body Language On Women]

How could this possibly be bad? It’s bad because it tells her that you are either one of two types of men: Either a loser with no life, or a codependent and obsessive type who is going to smother her with neediness. No good.

So if she calls while you are busy, let her leave a voicemail or pick up and ask her if you can call her back. And don’t re-arrange your schedule just to fit her into it. This will let her know that you are a real person with a life and that you aren’t simply looking to club her over the head and drag her into your private dungeon.

4. Overdoing it on the First Few Dates

Okay guys, this is a really big deal.

A really, REALLY big deal. Are you one of those guys who goes all out on the first date with a nice dinner at a fancy restaurant and who spends a lot of money on her the first time you meet?

Are you showering her with gifts and attention before you’ve even been on the fourth date? If so, stop immediately!

It’s costing you money and it’s costing you a whole lot of disappointment and heartache. Again, you might be wondering how it can possibly be bad to go overboard for a woman you are really interested in.

Let’s just break this down logically for a moment. First, if you are going all out on the first date, you need to ask yourself why you are spending so much money on someone you might never see again. Seriously, how many times have you kicked yourself for spending $50 or more on the first date, only to find that there was not going to be a second one?[Read: Controlling Emotions On Women]

I’m guessing that if you’re in the habit of doing this, that you have experienced this more than once. Overdoing it on the first date, or even the second or third, is another demonstration that you are a man of low social value.

Think about it, if you have to go out of your way to spend a lot of money to impress a woman, what is that saying about your personality?

Not only that, don’t you think that she is wondering why a man would go to such lengths on a first date? Sure, if she’s really naive she might be saying: “Wow, how flattering. He REALLY likes me!”

But any woman with half a brain knows it takes more than just a few dates to find out who someone really is. So if you’re overdoing it on the first few dates, you’re either telling her that you’re not being sincere or that you aren’t interested in her for who she really is.

5. Waiting for Her to Show Interest

Are you one of those guys who waits to see if a woman is interested before you show interest in her? Why? If you’re interested in her just go for it and let her deal with how she feels about you.

Believe me, she will let you know if you are clear about your intentions. The problems arise when you over analyze every little move she makes and hold your cards close to your chest until you find out that you have a
winning hand.

Again, most women are looking for a man who can lead the interaction and who is willing to risk a little rejection to go after what he wants.

If you wait for her to show interest, you’re simply telling her that you’re unsure  of yourself. Okay, so now you’re probably thinking: “That’s great, you just told me what not to do. But how do I actually keep a woman attracted to me?”