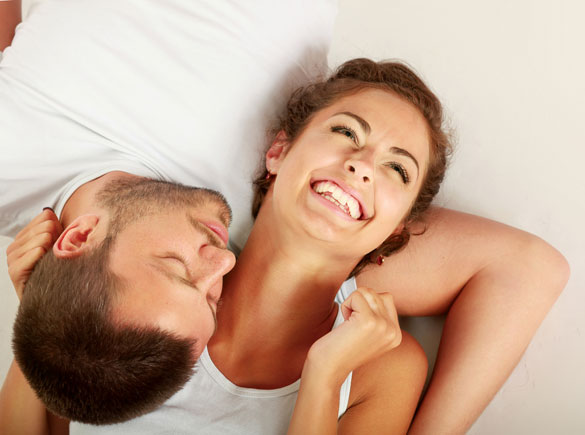 You know, the “perfect beauty” that you’re almost positive will be ditching you for some guy who drives a BMW, is a triathlon champion and who takes his mother out for dinner once a week.

There’s nothing more painful to a man than the memory of the ‘beauty’ that got away. So is there a way that you can actually keep this kind of a woman attracted to you? There is, but it’s probably not what you think….

Okay, here’s the first thing you need to ask yourself: If she’s a “perfect beauty/perfect 10” what does that make you? Are you the 5, the 7 or even the 9 who was lucky enough to have this “perfect 10” fall into your lap?

Please, what kind of a man do you think she is looking for? Any super hot woman knows that men are interested in her and she has no shortage of options to choose from. This means she can date only the best of the best if she wants to.

And can you guess what the most important thing is that a woman looks for in a man? Confidence. [Read: How to be confident around women]

How confident are you going to be in yourself if you keep thinking of her as a “perfect 10” instead of just a woman who you are interested in? All that you are doing is making her a giant in your mind and yourself an ant.

If you think that this doesn’t show on the outside, you’re underestimating how intuitive women can be. So before you even think about how you can keep this woman attracted, you need to get the “perfect 10” illusion out of your head.

If you’re going to regard anyone as a “perfect 10,” make it yourself. This will give you the guts to do the one thing that will keep her attracted….

Appeal to Her Natural Attraction Instinct

Did you know that it is possible for a woman to be attracted to a guy that is not attractive? If you doubt this, just think about how many super attractive women you have seen with guys who were only average looking.

And what about all those beautiful women who seemed to be getting nothing but “jerks” who aren’t even that good looking and who seem to have nothing going for them?

If you’re one of the many, many men who’ve been puzzled by this phenomenon, it’s because you haven’t yet understood a woman’s natural attraction instinct. Most women will tell you that they are interested in a man who is well mannered, polite, and an all round nice guy.

So why don’t they ever seem to be dating these types of guys? Because most women don’t understand their own natural attraction instinct either.

Most people who you meet are not very self-aware about what they really want, both men and women alike. This is the reason why you see people doing things which are completely contrary to what they really want out of life: they say they want to lose weight, but they keep overeating, They say they want to be wealthy, but they don’t manage their money.

Most people don’t understand what really drives them. So what drives women’s attraction towards men? The needs for safety, security and survival. Second to these are the needs for excitement and for personal validation.

The problem is that most men don’t appeal to women’s need for safety and security because they allow the presence of an attractive woman to weaken their confidence.

Lack of self-confidence demonstrates to a woman that you are weak. This weakness tells a woman on a subconscious level that you might not be able to fulfill her needs for safety, security and survival.

Of course, most women are not self-aware enough to realize that this is what’s happening.

All they know is that they “see you as more of a friend.”

Since super attractive women (“perfect 10s”) have plenty of guys competing for their attention, they are not going to stick around for a guy who seems to lack self-confidence. So how can you be the guy who appeals to her natural attraction instinct?

If you want to keep a super hot woman attracted to you, then you need to do what 99.9% of the guys who pursue her NEVER bother to do: You have to stop trying to impress her, stop worrying about whether or not she is attracted to you and stop allowing how she feels about you to affect your sense of personal value.

Yes, all of this might sound counterintuitive compared to what most men would do. But think about this: just  imagine how much attention the really attractive woman gets. From the time that she is about 16 years old, she probably has at least one hundred men a year interested in dating her…and that’s being REALLY conservative.

Since the common line of reasoning is for a man to go out of his way to impress her, to agree with everything she says, and to cater to her even when she’s acting like a brat, how bored do you think that she is of that kind of thing? Not only that, since she obviously knows that these guys are just doing this to win her attention (or a night in the sack), don’t you think that she’s a little burnt out and looking for someone who is genuine?

So what do you think would happen if you are the guy who takes the road less traveled? What if instead of trying to go out of your way to impress her you decide that you are going to be who you are and let her deal with it? This doesn’t mean that you have to be rude or disrespectful to her.

It simply means that you don’t reinvent yourself just to keep her attracted to you. This is the reason why you see so many “jerks” dating beautiful women.

These are guys who don’t go out of their way to impress a woman and who aren’t afraid to put a woman in her place when she starts acting bratty or unreasonable.

Sure, some of these guys are a little rough around the edges and the women they’re with might even complain about that. But they stay with them because they appeal to a woman’s need for safety, survival and security.

The woman knows that this is a guy who has the guts to stand up for her and keep her safe from all the other men out there.

The good news is that you can still be this type of guy without being a “jerk”, and when you learn to do that, you become the type of man that every woman (even “perfect 10s”) dream of.